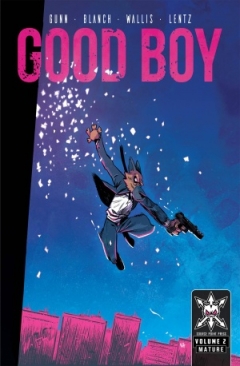 With revenge in his rearview mirror, Flint heads for The Farm; a peaceful community for retired and deactivated Guild members. But his dreams are shortlived when he finds the facility in rubble after an attack by a mysterious canine named Tucker who will stop at NOTHING to repay a decades old vengeful debt. Collecting Good Boy: Volume Two issues 1-4