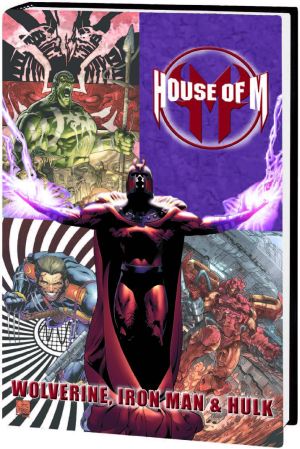 Explore the people and places of House of M! Wolverine carries burdens too great for even the most powerful mutants to bear. Has it caused him to finally snap? All the details you need to know about Wolverine's mysterious past and his place in House of M are revealed. Then, see Steve Rogers move from the '40s to the present day - bearing witness to a changing landscape, and watching as man becomes the minority and mutant the ruler. And in Iron Man, Tony Stark is the smartest, most successful sapien on the planet - the best and brightest of a dying species. Does it bother him that the House of M uses the technology produced by Tony's multi-billion-dollar company to keep Sapiens down? Plus, Bruce Banner travels to the Australian outback where he's forced to save a tribe of Aborigines from a dangerous conflict between a sect of A.I.M. and the ruling mutant government. All this plus Deadpool is reunited with the real but very, very different Cable! Collecting WOLVERINE #33-35, IRON MAN: HOUSE OF M #1-3, INCREDIBLE HULK #83-87, CAPTAIN AMERICA #10, PULSE #10, CABLE & DEADPOOL #17, and material from HULK: BROKEN WORLDS #1.