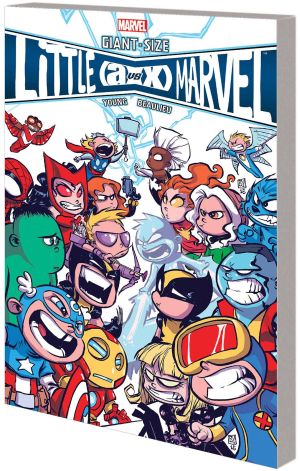 Skottie Young brings out the big guns - and the little Marvels - in the series fans have been waiting for! In the Battleworld zone known as Marville, playtime is serious business - and Marville's pint-sized heroes are working overtime to prove to their new neighbors which crew is toughest! With super-powered dodgeball, high-tech hideouts and eye-puns aplenty, Marvel's most adorable heroes aren't pulling any punches. This larger-than-life, fun-sized adventure features all your favorites - just, you know, shorter - including Cyclops, Hawkeye, Black Widow, Wolverine and more as the toughest, funniest, craziest and most adorable Marvel heroes throw down in a battle of the fittest! The smaller they are, the harder they brawl - this is Battleworld, after all! Collecting GIANT-SIZE LITTLE MARVEL: AVX #1-4 and A-BABIES VS. X-BABIES #1.