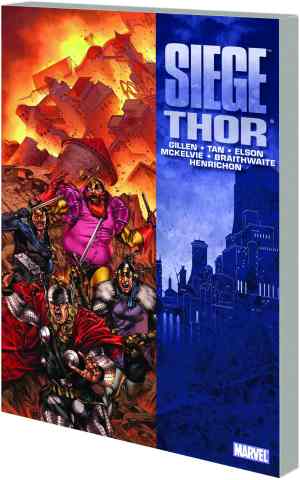 Asgard will fall, and gods will die. Surrounded by the nefarious Norman Osborn, his super-villain lackeys and the combined forces of H.A.M.M.E.R., the home of the Norse gods is under siege. Meanwhile, the city's champion, Thor, is in exile - and his wicked stepbrother, Loki, is putting his twisted plans into motion. But even with the odds stacked against them, the citizens of Asgard are a warrior race, and they'll defend their home to the bloody end. It's all-out war for the gods of the Norse pantheon as Thor, Balder, Heimdall, Tyr and the rest sacrifice everything to protect their city. Meanwhile, the New Mutant Dani Moonstar must make good on a deal with the goddess Hela by ushering those Asgardians slain in combat to her domain. But when given the power of the Valkyries, can Dani refrain from entering the chaotic fray around her? Collecting THOR #607-610, NEW MUTANTS #11 and SIEGE: LOKI.