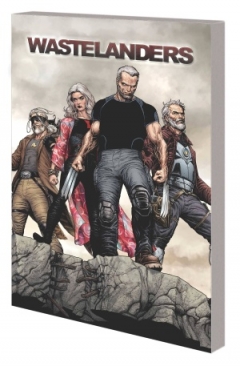 Return to the dystopian future world where the villains won! Get ready for shocking new stories from a disturbing world, taking their cue from the breakout podcast inspired by the original OLD MAN LOGAN saga! For Logan, saving the day looks very different with a baby Hulk in his arms - and protecting the child may be his downfall! Learn how a blind Hawkeye trained with the man once known as Daredevil! The mysterious Black Widow infiltrates the deadly land of the Lizard King! A guilt-ridden Peter Quill visits the site where he lost his great love! And as he rules over his domain in the Wastelands, a greater destiny calls to Doom! Collecting WASTELANDERS: WOLVERINE, HAWKEYE, STAR-LORD, DOOM and BLACK WIDOW.