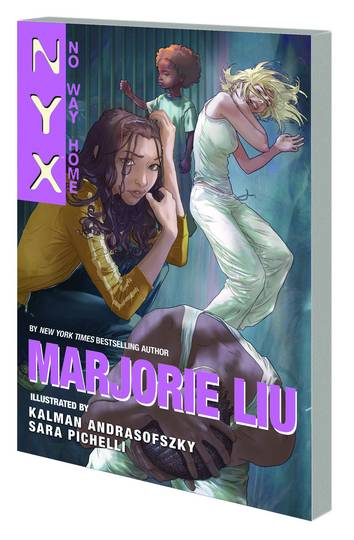 Kiden Nixon is a survivor. She survived the murder of her police officer father, the discovery of her latent mutant powers, even a stint living homeless on the mean streets of New York City. And at 16, she has finally managed to settle into a happy life. But she discovers the home she built herself is a house of cards when she returns to her apartment to find the place trashed, the walls covered with blood and her mentor Cameron Palmer missing. Fearing for their lives, Kiden flees with her roommates: Bobby Soul, an ex-gangster with the ability to inhabit people's minds; Tatiana, a runaway with unusual transformative abilities; and the autistic Lil' Bro. Kiden is desperate to rescue Cameron - but when it becomes clear she's being framed for the disappearance, she finds herself in the crosshairs of the police and S.H.I.E.L.D. Now, Kiden is back to where she started: on the streets and on the run. Collecting NYX: NO WAY HOME #1-6.