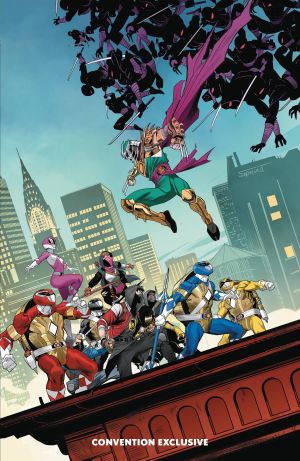 The Power Rangers arrive in New York City to find their missing teammate Tommy Oliver, AKA The Mighty Morphin Green Ranger, but soon discover he's joined forces with the villainous Shredder and the Foot Clan! But the Rangers must also deal with another unexpected (fr)enemy - the Teenage Mutant Ninja Turtles! Can these heroes find a way to work together to defeat the bad guys and save the world from total destruction?! Written by Ryan Parrott (Power Rangers: Necessary Evil) and illustrated by Simone di Meo (Power Rangers: Beyond The Grid), the Mighty Morphin Power Rangers fight - and maybe team up with - the Teenage Mutant Ninja Turtles for the first time ever. Collects the complete 5-issue series.