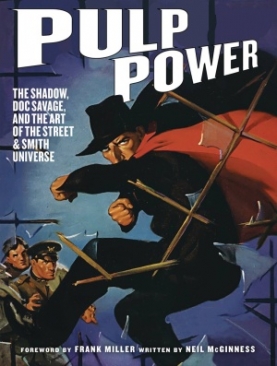 PULP POWER THE ART OF STREET AND SMITH UNIVERSE HC

Pulp Power gives fans a rare glimpse into the pre-war pulp novel decade of the 1930s, a period of bold action and adventure storytelling that ultimately led to the creation of the comic book and the superheroes we know and love today. In more than 500 novels written between 1930 and 1940, The Shadow, Doc Savage, and the Street & Smith universe of characters captivated a generation of Americans with their heroic exploits and inspired a new generation of writers to create a pantheon of comic book superheroes in their mold. In Pulp Power, hundreds of these eye-catching covers are reproduced as a collection for the first time. Comics legend Dan DiDio provides context for the cover illustrations alongside a narrative discussion of the influence of the Street & Smith superhero universe on legendary creators such as Orson Welles, Truman Capote, Michael Chabon, George Lucas, Agnes Moorehead, James Patterson, Walter Mosley, Dwayne Johnson, Frank Miller, James Bama, Jim Steranko, Jim Lee, Gail Simone, and many more.