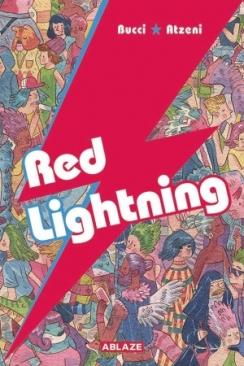 It is the morning of January 10, 2016, and thirty-year-old Samuel is ready to leave the house and live another day of his ordinary existence. As soon as he arrives on the street, he learns about David Bowie's death. The news strikes him so hard that he is stunned, and his are not moments of bewilderment, but hours, days, years, and centuries...he finds himself catapulted across space and time. He awakens hundreds of thousands of years later, in a society of the future-in the year 200016-not so different from his own, although he is surrounded by people dressed as dinosaurs, integrated biological technologies, and there is a global well-being. Is it perhaps the utopia of the future? Samuel will have to try to find out and find his own dimension in the process, without losing himself. Red Lightning is a touching tribute to David Bowie. Six years after Bowie's death, Marco B. Bucci redefines science fiction with a graphic novel masterfully illustrated by the talented Riccardo Atzeni. Long live the White Duke!