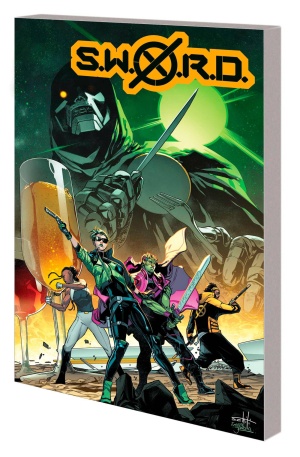 The morning after the Hellfire Gala! The party is over, but not all the guests have gone home. Victor Von Doom is staying for dinner. And he's begun chatting with a very old friend in a very new setting. Chatting about thrones, empires, magic, Mysteriumand the cosmic chaos of the Last Annihilation! Meanwhile, now that the X-Men have gone interplanetary and the central seat of Arakko has been claimed, everyone knows who speaks for Sol. Storm rules! But when you have to prove to your people who you are, every single day without fail, what eventually becomes of who you once were? As the Lethal Legion attacks Mars, explosive problems arise on the Peak - and a mole inside S.W.O.R.D. is revealed! Meanwhile, Wiz Kid and Cable find themselves face-to-face with the one foe they never expected! Collecting S.W.O.R.D. (2020) #7-11.