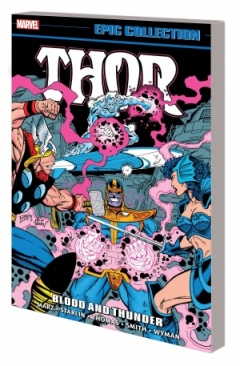 Thor on a cosmic rampage! The God of Thunder has gone mad, and the most powerful heroes in the cosmos may not be able to stop him! Beta Ray Bill and Sif hope to talk him down. Adam Warlock, Doctor Strange and the Silver Surfer intend to cure him. And Thanos is always spoiling for a fight! But when the berserk Thor gets an immense power-up from an Infinity Gem, all bets are off - and even almighty Odin may be unable to save his son! When the dust settles, what comes next for Asgard? The High Evolutionary has some ideas - and they involve his new Godlings! From this cosmic crucible, Thor will emerge transformed - and come face-to-face with someone he never expected to see! Collecting THOR (1966) #468-475 and ANNUAL #18, SILVER SURFER (1987) #86-88, WARLOCK CHRONICLES #6-8 and WARLOCK AND THE INFINITY WATCH #23-25.