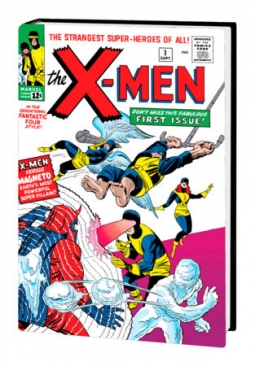 In 1963 the slow boil of the Marvel super-hero revolution exploded in a full eruption with a slate of new heroic adventurers that redefined comic-book adventure forever. Joining the Fantastic Four, the Amazing Spider-Man, Ant-Man, Hulk, Thor, Iron Man and Dr. Strange came the Avengers and an odd sister book featuring a weird assortment of brand new characters: Cyclops, the Beast, Iceman, the Angel, Marvel Girl, and the mysteriously-named Professor X. They were the X-Men, and little did anyone know that they would come to take the comic book business by storm. Stan Lee and Jack Kirby billed their new creations "The Strangest Super-Heroes of All!" and while their mutant powers were certainly weird, the binding concept of this band of heroes, a group feared, hunted and hated because the of prejudice of their fellow man was pure Marvel relevance, striking at the heart of Civil Rights battles of the time. So join us as we collect in this massive, painstakingly restored, archival volume as we recount the earliest adventures of the world's most-famous super-hero team as they encounter for the very first time their nemesis Magneto, the Brotherhood of Evil Mutants, the Juggernaut, Ka-Zar and the Savage Land, Master Mold and the Sentinels, and many more of Marvel's greatest heroes and villains. Supplemented with a bevy of behind-the-scenes bonus material, critical and historical essays, and original artwork, this volume is a bona fide must-have for each and every X-addict! Collecting THE X-MEN #1-31.