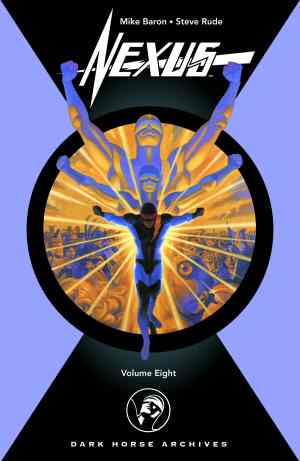 Horatio, Judah, and the Badger have survived their reentry of the Bowl-Shaped World. As they head from outer rim to inner city, the threat that prompted this journey worsens: the Gravity Well is nearing collapse. The Web's population is evacuating in a panic, hoping to escape the artificialblack hole. By the time this installment of Baron and Rude's celebrated sci-fi series comes to a close, the desperate trio will fight a powerful, fusionkasting tyrant in mortal combat, Kreed the Quatro will be sentenced to death for the Mars massacre, and Horatio will hang up the Nexus mantle once and for all!

A multiple Eisner Award-winning series that defined the careers of acclaimed creators Steve Rude and Mike Baron, Nexus is a modern classic not to be missed.

o Collecting issues 47 to 52 of Nexus Vol. Two and issue #1 of the Next Nexus miniseries, wherein we learn what the vengeful Loomis sisters have been up to.